In my previous post, a simple program was shown how variables were applied to a moving Sprite using the “Up Arrow” and “Down Arrow” of the keyboard. In short, the value of a variable can generally be accessed or changed at any time by the programmer. However, such variable can only store one value at a time.

There are times when you need a variable to store multiple data in your script, Scratch’s “List” block provides that concept of arrays to help you with these circumstances.

The “List” block stores a series of values in a single variable. Each of these values is an 'element' of the “List” and each element has an index value to mark its position within the list. Suppose you would like to keep an inventory of the following grocery at home,

The “List” block will keep a record of the above elements, and is displayed by the "List Watcher" at the Stage Area : 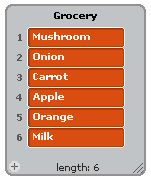 Note : I should have included the quantity for each element, but since the “List” block is a one dimensional array, I’ll leave it out for now until the next post where we will discuss about two dimensional arrays.

Start your Scratch programme now and click on the “Make a List” button (under “Variables” control block). A dialog box will appear as follows : 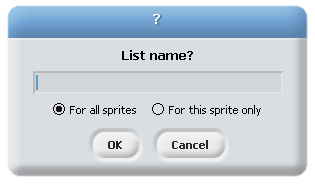 You are asked to give a name to the “List” you want to create, let’s name it “Grocery” and click the “”ok” button.

There are 7 blocks available in the “List”, and each has its own function. Let’s explore each block before we create a simple script for the Grocery.

Drag the block to the Script Area and click twice on the block. You have just entered two identical elements (called “thing”) in the “Grocery” list and the contents are shown in the "List Watcher"  below.

Replace the text with “Carrot” in the “add () to Grocery” block, click on it once and the list will be updated as shown below:

New entries always succeed the last item of the list.

I guess I don’t have to describe more, as your intuition should be able to tell you what the block does by its name. One thing you should know, the drop down menu displays only 3 items by default, regardless of its contents

There’s nothing to concern about, just key in the item number corresponding to the data you wish to delete.
The option “all” will remove all of the contents in the list.

This block is similar to the “add (thing) to Grocery” block, except that the new element “inserted” to the list precedes the item you had choosen. Referring to the list we had created earlier,

Let’s insert a new item “Onion” at item 2, and you will have a new list as below. 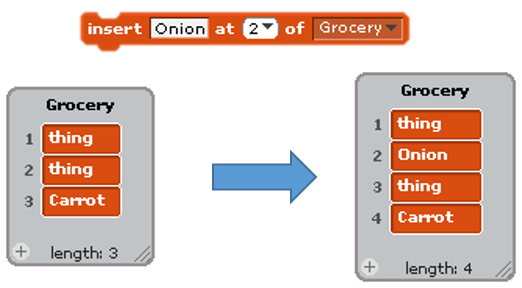 This block changes (or replace) the specified item's content to a given entry.
Replacing Item 1 (currently "thing") with "Mushroom" yields the following 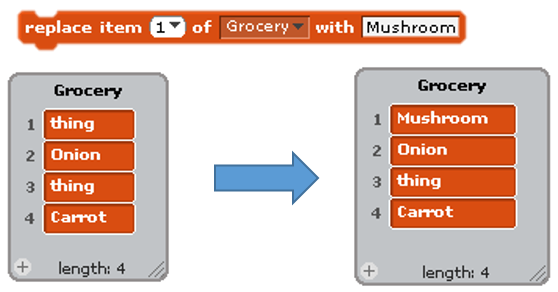 This is a reporter block, which reports the total item a list contains. The total item is also displayed at the bottom of the List Watcher 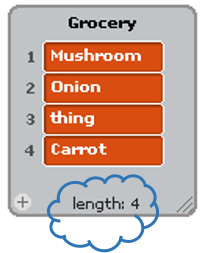 This is a “Boolean” block, which returns “True” if the text entered is equal to any of the elements in the list, otherwise it returns “False”. For example, if you need to check whether “Apple” is in your Grocery List, it will return “False” as the current list contains only Mushroom, Onion, thing and Carrot.
Example script is shown below :

Note that the text is case-sensitive. Mushroom is not equal to mushroom, as far as the block is concerned.

Let’s start with an example how the “List” block is applied. We will use the same inventory, and is shown below for convenience. 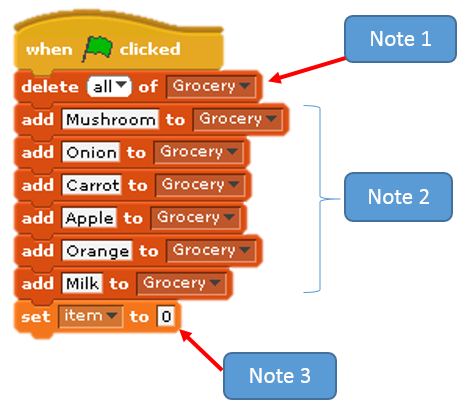 Note 1 : Delete previous entries to avoid duplicates.
Note 2: Elements are written to the “List” block in sequence.
Note 3 : Used for linking to its corresponding elements.

Next, we’ll create a script to make the Sprite summarize (or "Say" out) your inventory : 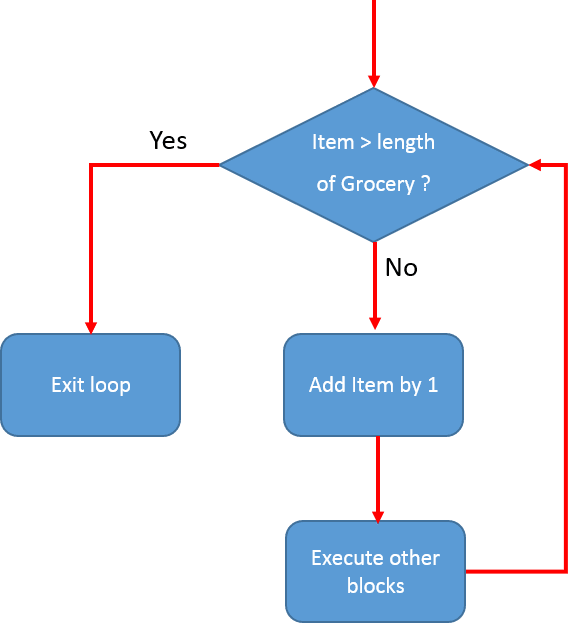 
In the “if () else” block, it checks if “item” is greater than “length of Grocery”. If true, it does nothing and exits the block, else it “says” out the grocery name. The next event is taken over by the “repeat until ()” block, which repeats its process as explained in Note 1. 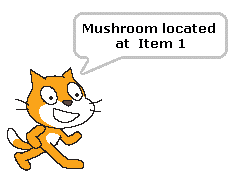 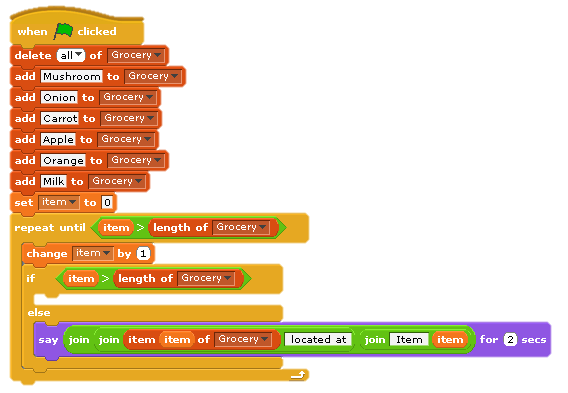 Below is the corresponding flow chart 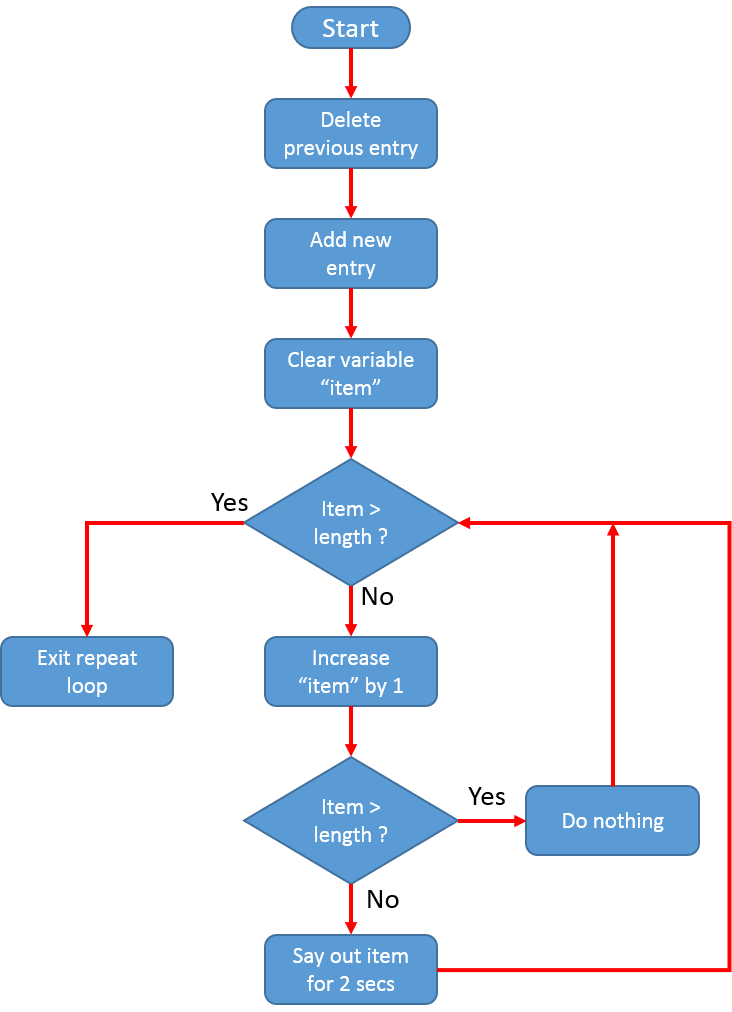 Alternatively, you can create a script to make the Sprite ask for the groceries you would like to enter.Below is an example : 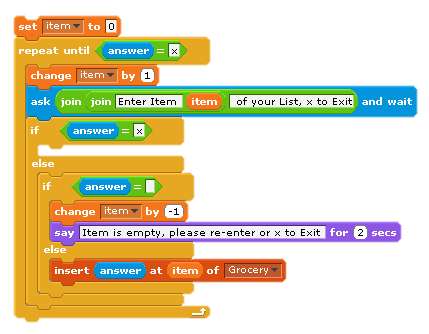 The above script allows you to enter as many data as you like until “x” is entered, telling the script you’re done with your entry.

The flow chart below provides a better picture : 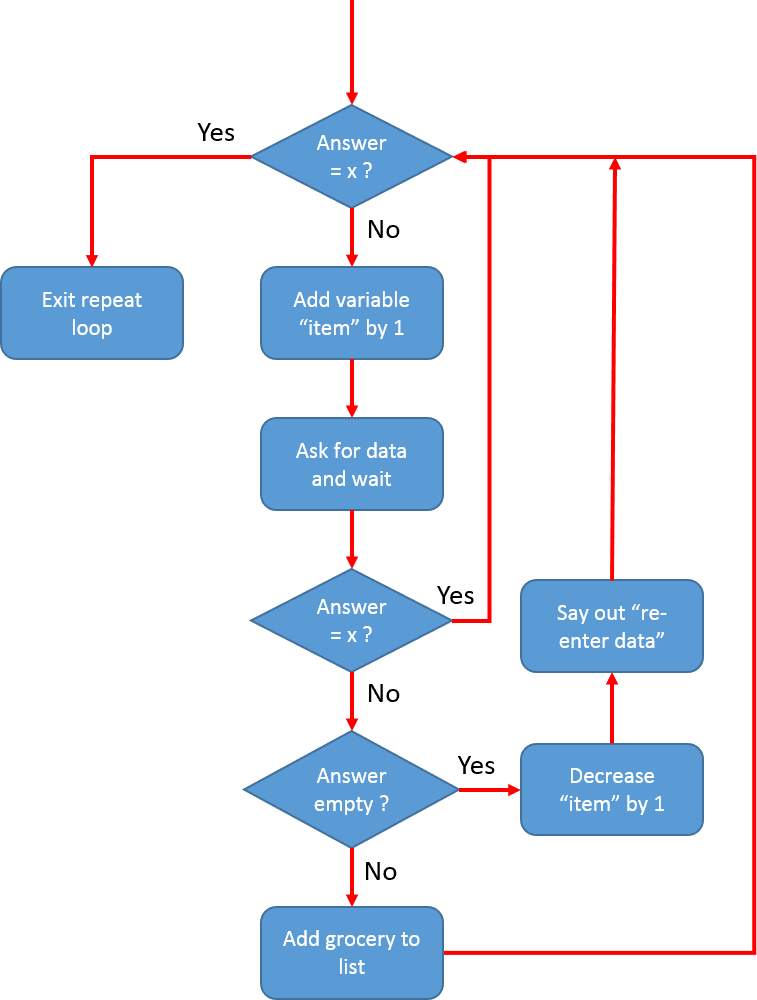 The new script is show below.

That's about it. Happy Scratching !!