Getting physical with Scratch

Don’t you find it entertaining if an animated Scratch that you had created comes alive when the night falls, and stops when the sun rises ??   Or turns on the alarm when there is an intruder around the perimeter fence ??


A typical example is show below

In the above set up, Scratch constantly polls information from the micro controller and check if the motion sensor is triggered. If true, it turns on the siren (alarm). The siren continues to switch on to a logical “True” state until the spacebar of your keyboard is pressed.

It’s not as difficult as you thought, all you need is to snap a few Scratch blocks as follows 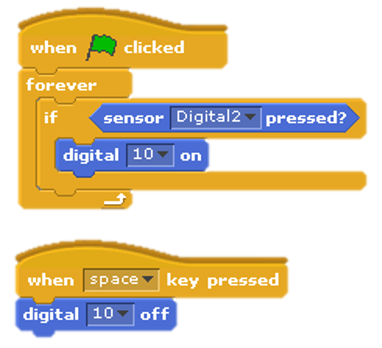 The combination of Arduino and Scratch Extension makes physical computing possible, that allows Scratch program to react and response to events happening outside of the computer. It is an engaging and practical topic that adds interactivity where children (even adults) enjoy learning about.

A Scratch Extension is an object that can be used with Scratch, in some cases as an add-on to interface with the outside world. There are many variants (or Scratch-like), specifically developed to teach children the concept of physical computing, each has its shortcomings and appropriateness for specific applications. Of the variants, Scratch for Arduino (S4A), developed by Citilab is a direct modification of Scratch 1.4 and is explicitly designed to work with Arduino UNO. However, the pre-assigned I/O pins in S4A hinders the flexibility of I/O configuration as you would in a micro controller. That doesn’t imply it is not up to snuff but relevance of its application.

The 18 I/Os are assigned as followss
S4A is an ideal program for beginners (at least in my context) but as you progressed, it might not be adequate for your applications where more I/Os are needed.

Citilab has also developed an extension for SNAP! called Snap4Arduino, a derivative of Scratch by Jens Mönig at MioSoft Corporation, with contributions by some folks at Berkeley.

SNAP! allows you to build your own blocks, and with the added features of first class list, procedures, etc, it renders a serious introduction to computer science to high school or college students.

Snap4Arduino is purportedly tailored for the Arduino variants such as the UNO, Mini, Mega2560, Pro, Lilypad, etc. Although it’s still in its alpha phase, it works flawlessly with the atmega328 and atmega168 processors, namely the UNO, Pro Mini, to name a few.


For the Mega2560, all 54 IO pins are accessible, except there are some bugs with PWM, digital input and Servo functionality for higher pins (pin14 onwards).
Unlike S4A, all the digital I/O pins are configurable, extending its flexibility.

As of this date, the bugs has not been fixed but the folks at Citilab has committed to sort it out prior to the upcoming Scratch@MIT conference, somewhere in August this year.


You can download both S4A or Snap4Arduino at http://s4a.cat/ and http://s4a.cat/snap/ respectively. Instruction to install the program is available at their site.

Throughout this blog, we’ll start with S4A for the very beginners and switch to Snap4Arduino for projects where more IOs are needed.